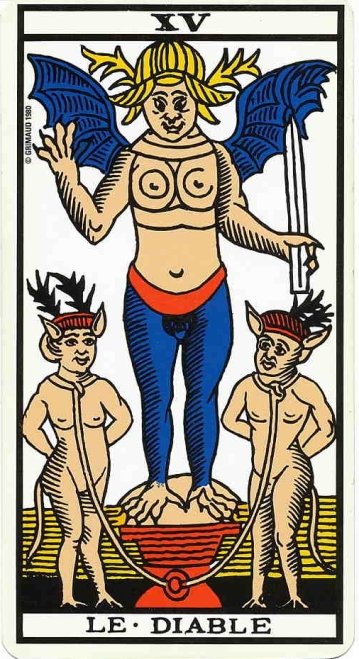 Among the different combinations which constitute the number 15, the arrangement 10 + 5, and 11 + 15, is more suited for the context of Card XV.

Here we have Man introducing his particular vibration into an organized network; this activity takes place in opposition to the Universal Rhythm; hence, it is represented by the Devil.

10 signifies a completed cycle, and 5= 4 + 1 indicates beginning a cycle again, an activity which penetrates the material world, one which rises up to struggle with it and invest in it, through vibration,  represented by 5, the rhythm of life. Another way of looking at it is that 10 presents the equilibrium of a completed cycle and 5 marks the instability of a new beginning with all its uncertainties.

11 indicates force and 4 is matter, so 11 + 4 = 15 signifies the strength of Will vigorously stirring up matter, Will which used for good as well as for evil. This combination confirms and accentuates the preceding one obtained by 10 + 5, and this is why this Card follows Temperance which it has the effect of materializing. The eternal recurrence of Temperance takes place on the moral plane; the Devil takes it into the human plane.

THE DEVIL IS A PRINCIPLE OF SPIRITUAL ACTIVITY WHICH SEEKS TO PENETRATE MATTER AND DRESS ITSELF IN IT IN ORDER TO MATERIALIZE ITSELF.  It symbolizes great evolution because it is the symbol of evil; it is also a symbol of triumph. There are those who have given it a maleficent symbolic value, but it has profundity and is of a divine essence. It is also as necessary for humanity as good is, since it is a bridge between good and evil. Divinity, as Man conceives it, can be imagined according to his interpretation as Good and Evil.

His headdress is a wreath of flames to show that his origin was born on a higher plane, since if the Devil expresses in the real world the struggle of Man in the universe without the support of the Divine, he is no less himself an expression of divine laws.

His blue wings, upright as they are, show that his action tends to produce an upward evolution.

His torch illuminates the world of illusion; its white flame indicates his neutrality, and people, depending on the the activities which they attribute to him in his domain, are the only ones who can lend it color.

His fleshy torso, having both nipples and breasts, represents both the male and female fertility of the vital forces in the material world. His right arm is raised to affirm that his action is coming from Above, but his fleshy claws and his placement on a flesh-colored surface make it clear that he is clinging to matter and that he will never be able to operate in the Divine plane.

His red belt denotes that he is entirely encircled by matter, all the way down to its most base expressions. His blue legs show that he is causing Man to evolve towards spirituality.

His hermaphroditism, marked by the simultaneous depiction of attributes of both sexes, demonstrates (depending on whether one looks at it from a universal or a particular point of view) that he is perpetually engendering, all by himself, the renewal of matter either by penetrating it with his vital strengths, or by drawing it back into himself because, by encompassing both the male and female poles within himself, he functions in a self-contained system and controls the vital forces for himself.

His red pedestal indicates that he dominates the material world. It is of a modest size to show that his rule is precarious and made unstable through his nefarious activities.

The two beings bound to the pedestal are the emanations of the Devil and represent the exterior aspect of his sexual polarity, showing that one is in bondage and that the other will feel the his tugging on the chain, without being able to escape. On the other hand, they also symbolize  the domination which subjects to slavery all human and animal matter–that is to say, the entire world.  They are male and female because by extension they are the two principles of polarity of the whole world. They wear on their heads red headbands to show that Man can be mentally entrapped in the material world, as the Devil by himself not offering any principle of elevation. The black flames, the ears, and the animal tails indicate that the Devil is a force necessary for evolution, from which one must free oneself and which, without this effort, Man remains trapped in the material world, whose only emanations will be dark ones. In other words, the Devil symbolizes Man in bondage to Nature, which renders him part animal.

This bondage is based on the laws of cause and effect, which is to say in the repercussions produced by Man’s past actions. These effects are evil when Man permits himself to be chained to the material world, but become forces of evolution when he struggles to free himself.

The ground, striped with black lines on a yellow foundation, signifies that the emanations of the material world stemming from evil are able to conceal the sources of divine intelligence. The parallelism of the lines indicates that the two proceed together.

Orientation of the Figures

The main figure is face-forward, suggesting a direct act of domination, but by contrast the smaller figures are a quarter turned: the one on the left (the female) towards the right, and the one on the right (the masculine) towards the left, with their heads almost face-forward, hence in opposite directions, suggesting thereby the force of passivity combined with that of activity–but with constraint and disharmony as designated by their attachments, their horns, and other animal features.

The name “THE DEVIL” has been given to this card because it represents Man acting in the material world through his own power, without spiritual support, so that when he is not in search of spirituality, he is subject to the temptation of transgressing against cosmic morality and capitulating to his instincts. The Card signifies, therefore, success in the material world through direct effort and through the council of reason, or surrender to the inevitable.

Meanings as They Relate to the Three Planes

MENTAL. Great egotistical activity without concern for justice, this Card not having any practical significance in the spiritual world.

ANIMISTIC. Plurality, diversity, inconstancy, because we are searching in all directions and relating everything back to ourselves, without concern for others.  Debauchery.

PHYSICAL.   Great influence in this plane, especially in the material domain, in concrete implementation. A strong force of hold on others. This is, however, a card flawed in the physical world; when it signifies victory, it is victory obtained by evil means. Thus it is a benefit acquired in a reprehensible way, or through thefts committed with impunity. In the realm of emotions, it is the conquest of another physical being through deplorable practices, without scruples, leading to the destruction of others, but having a successful result. This is because it is a card heralding punishment; when it appears in a spread, it announces a the victory which will be but momentary, and followed by retribution, if the question posed is not free of egotism.

Like a disease, it indicates a great nervous instability, symbolized by the claws drawing on mysterious powers and asserting control and possession, the results of humanity’s past.

With respect to health: increase of trouble, complications.

In sum, in its fundamental sense “THE DEVIL” represents a form of human activity, the stirring up of the material world, in which Man will become enslaved after he has obtained an ephemeral success, or freeing himself with the powers of consciousness, depending on his egotistical goals or material evolution.

Let's look at the cards, shall we? View all posts by smallcabin