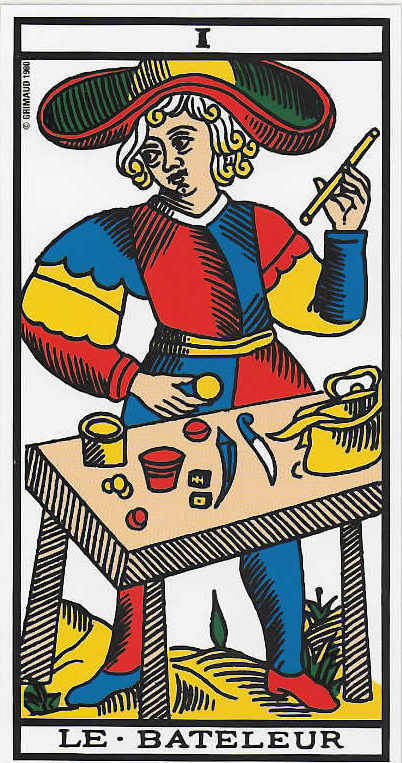 Draft of a translation of Paul Marteau’s Le Tarot de Marseille. A mighty rough draft at this point.

The number 1, an expression of universal positivity, symbolizes the primordial creative principle within its multiple realizations. The manifestation of this power, located at the origin of all things, causes it to engender by its repetition, all the active and passive universal forces which the other numbers are representations of. These are those which give individuality and identity to objects and phenomena of the observable world

In the study which follows, the first Card of the Tarot, as a reminder of the primary positivity, should provoke us to imagine an active and creative power. This is why it is depicted as someone who is standing, surrounded by certain attributes permitting him to perform his activities.

The symbolism of this first card expresses, therefore MAN AS AN ACTIVE AND CREATIVE POWER.

The qualities of this power are indicated by the layout of this card, as much in the details of the figure and his clothing as in the objects depicted.

At the Dawn of his manifestation, Man, cast forth on the Earth, surrounded by a world hostile by nature, found himself reduced to the activities of negotiation and defense. This instilled in him some reflexes which he strove to perfect. This skill he acquired throughout the ages, and still in the process of development, lends itself to a comparison in the Tarot between the human behing  and a juggler, obliged by his situation to direct his attention constantly towards the phenomena of the observable world. These tendencies, endowed with physical shape, give the first Card its name of Juggler.

First of all, you will observe that the Juggler is standing firm, his feet flat and firmly on the ground, connected with the magnetic influence which he continues to be subjected to. His wand (a symbol, like the sceptre, of intellectual authority) which he holds in his left hand and directs towards the sky permits him to maintain contact with the currents above, those which exert their influence on the earth. At the same time his right hand manipulates, with skill and discretion, the objects placed on the table. These are:

—The knife, bringing the Sword to mind, a symbol of effort, of difficulties, of struggles.

—The coins, representing the suite of Coins, symbols of acquisitions and jobs to be accomplished.

—The chalice, standing in for the Cup, a symbol of love, passions good or bad, and sacrifice.

—Finally, the wand which he holds in his hand, an image of the Baton, completing the four devices of the Tarot.

In their generality one will remark first of all that his hat, whose exterior is bright green, signifies adaptation and mental force; its yellow or gold crown: wisdom; the red border: material passions. Its form as a [insert lemniscate here], a symbol of infinity, of universal Life, reminds us that Man is subject to the bonds of the universal harmonies in which he takes part.

The hair of the Juggler, white in their length and gold at their curly ends, designates intelligence as the fruit of age and experience.

His tunic above the belt is, on the left side blue and on the right red, and these colors are reversed below: the blue represents the psychic and receptive aspect of his personality, and the red, the passionate and active side of his personality, each in balance with the other.

His belt is yellow, a mental link united wisdom and spirituality, and his collar is white, for this spirituality must be subjected to intelligence, represented by his head.

His left arm is red on its upper part, yellow in the middle and blue on the lower part, and he is holding within his fingers a yellow wand; the arm is a a symbol of gesture and power, and the left arm is directed by the psyche, since the material world, inert in of itself, only moves under the power of the psychic gesture.

His right arm is the opposite of his left in its colors, and he is holding in his fingers a yellow ball which synthesizes the principle of cosmic matter. This arm is held lower to indicate that Man must subordinate his actions, as suggested by his right side, to the laws of the Cosmos when he maintains contact with them.

His legs, the left one blue with a red shoe and the right one red with a blue shoe, indicate that the right side dominates the elements through psychic and active equilibrium.

He holds a sphere in his right hand and, as depicted, looks like it could be a disk as much as it could be a ball. The Juggler is cultivating this illusion and is able to present it, as he pleases, as flat or spherical. The ball represents a state of continuity; when presenting it as as disk, the Juggler is limiting it and in this state it takes on the idea of human Intelligence. As a sphere, however, it is an expression of divine Intelligence. The Juggler can, using his powers, present it in one way or the other. In other words, he can confine intelligence to the physical plane and keep it there, and he cannot do so on the psychic plane. It is for this reason that he shows the ball in both its aspects.

The table, the color of flesh, symbolizes the fact that the machinations of the Juggler are supported by the living material world.

The sack of objects is yellow: scattered as they are, they have their own destiny, but will reunite in the sac, give up their individuality and re-establish unity by forming a complete composite, overseen by mentality.

The yellow vase represents mental power. It can contain the three yellow pieces, expressive of the trinity of element of mentality, and the four red pieces, divided into two sets of two to symbolize the double polarity which constitutes the four elements, the principle of the material world.

The dice, a representation of chance, are yellow to show that the divine intelligence always intervenes and that nothing is really left to chance. The points marked on them certainly show that what Man calls chance is actually the combination of numbers obeying laws so profound as to be invisible.

The knife represents the object which can cut the thread of life, but the blue color of the handle indicates that it can only operate in a spiritual way, for Man is able to be master or slave of his destiny, depending on the state of his soul. Its sheath, also blue, underscores the freedom one has to use the knife or not. If Man puts the knife back in its sheath, he gives up the power of disabusing himself of defective sentiments and becomes a slave to himself.

The red chalice is the temporal power of combinations; the dice are, separate, like the knife separated from its sheath.

The ground, yellow, represents the energies which one must capture; the Juggler must rely on intelligence, and from this will emerge fertility, as symbolized by the green sprouts.

These diverse elements all invest him with the possibility of evolving the matter by means of the spirit, but, on the other hand, they oblige him to struggle against adverse hidden forces. If he relies on his wisdom, these forces will let him maintain his balance and he will so be able to be the master of them, instead of being their plaything.

Orientation of the Figure

The upright posture of the Juggler, his body facing us, his head turned to the left[i], indicates that reflection must come before direct action. He weighs alternatives and makes a choice before acting.

The name of the card, “THE JUGGLER,” signifies the possibility of juggling many objects, that is to say, managing one’s circumstances with skill and making the right choices.

Meanings as They Relate to the Three Planes

MENTAL.  A talent for combining things, the intelligent appropriation of the elements, of subjects which come to mind.

ANIMISTIC. Psychic matter, that is to say, reaching out for new things, represented by the vigor of the figure and by his capacity as one who creates.

PHYSICAL. The green on his hat is relevant, on the physical plane, to matters of health: great vitality and power over the afflictions of a mental or nervous nature, obsession or neurasthenia. This Card predicts a favorable trend, but is not specific and does not assure healing. To understand this, it will be necessary to consider the neighboring card. A tendency towards diversification in one’s actions, the lack of unity in one’s undertakings (indicated by the infinite diversity of possible combinations of the objects placed on the table). Hesitation. Indecision. Lack of certainty about events.

INVERTED.  Discussions, arguments which may turn violent (considering the strength of the figure); imperfection in actions, misguided undertakings.

In sum, in its fundamental sense “THE JUGGLER” represents Man in the presence of Nature and with the power to master its currents.

[i] When considering the posture of each figure, the situation is determined by its relationship to the observer; for example, the head of the Juggler is regarded as turned to the left, while, in the world of the illustration, he would be looking to his right.

Let's look at the cards, shall we? View all posts by smallcabin